Higher temperatures mean more reasons to head out of the city. An escape to Long Island’s East End is always alluring, but even more so when combined with the draw of an exceptional exhibition at Water Mill’s Parrish Art Museum.

John Graham: Modern Maverick affords a once-in-a-lifetime opportunity for art lovers. It’s a chance to experience, probably for the first time, an extraordinary artist and a towering figure in Modern Art who, somehow, slipped into relative obscurity (surprisingly, since he was important enough to be included in the inaugural 1932 Whitney Biennial.) The Parrish’s Chief Curator, Alicia G. Longwell, along with guest co-curator Karen Wilkin, and consulting curator, Professor William C. Agee have gathered 65 paintings, a selection of works on paper, drawings and notebooks, and a tremendous amount of historical research that paint a portrait of a seminal artist. A Modernist Cityscape by John Graham

“Much of the history of American art in the first half of the twentieth century pivots on the artist John Graham, who turns up Zelig-like in every circle of influence in the period,” the curators state. Not only did Graham appear in circles of influence, but he influenced those circles, as well. He advised the legendary Cone sisters, Etta and Claribel, who were, themselves mavericks of Modernism. Their collection of Matisses, Picassos – and yes, Grahams – form the core of the Baltimore Museum of Art today. 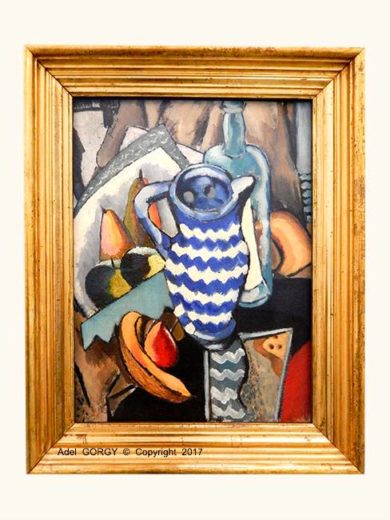 Graham’s Still Life with Fruit and Blue and White Pitcher, from the Baltimore Museum of Art is on view at the Parrish

Graham was born Ivan Gratianovich Dombrowsky in tsarist Russia to parents of minor nobility. He was well educated and familiar with the cultural and intellectual elite. After serving as a cavalry officer in World War I, he supported the White Russian army, was imprisoned by the victorious Red army, was subsequently released, and then immigrated to New York. If that’s not enough of a life story, he traveled often between New York and Paris, introducing key elements of each art scene to the other, and studied under John Sloan at the Art Students League along with Barnett Newman, David Smith, Adolph Gottlieb and Alexander Calder. He worked alongside artists like Arshile Gorky and Stuart Davis, and, in 1942, Graham curated French and American Painters, an exhibition at New York’s McMillen Gallery introducing two fresh, young talents –  Jackson Pollock and Willem de Kooning. Though Graham painted still-lifes, landscapes, and geometric abstractions, he’s best known for his portraits which fill the introductory gallery in the Parrish show.  They display an intriguing mixture of classicism and modernity. Flattened female figures, posed somewhat rigidly, look out at the viewer, but indirectly, as many of them have curiously crossed eyes. He claimed the feature was utilized “as a means to anchor space to a point in the room, to create more tension.” Studying many of his portraits at once, one feels there might be a reference to features of specific models, albeit exaggerated.  But the eyes also deliver a surrealist, unsettling touch. Graham’s portraits give off a sense of deep respect for the past, and at the same time, they’re iconoclastic.  A Madonna-like face emerging from a blue background is inscribed with curious geometric lines and enigmatic symbols.  “Celia,” on loan from the Metropolitan Museum of art, presents a beautiful woman, classically posed with her arm resting on a mantel.  She’s as refined as any Raphael or Ingres, but she’s two-dimensional, unshadowed, distorted and pressed into an unreal space – cool elegance with a dash of Surrealism. Many familiar schools and styles turn up in Graham’s canvases. The influence of established painters is clear.  It wouldn’t be wrong to see Picasso, Braque, Matisse and Gorky in many of his works.  But you’d be missing what makes his work distinct.  Having a rare chance to see a lifetime’s worth of work, affords a nuanced view of a complex artist.  References to Renaissance and Romanticism coexist with Cubist and Constructivist elements.  Graham was a painter who did many things and did them all exquisitely. He died in London in 1961. The Parrish is located on one of the most beautiful patches of earth within a day’s journey of Manhattan. It’s housed in an architectural marvel that’s at once both humble and the height of sophistication and provides absolutely perfect light for viewing art. There’s an ever-changing rotation of exhibitions and works that highlight both treasures from the past and cutting-edge contemporary art. Put the Parrish on your summer bucket list and you won’t be disappointed.